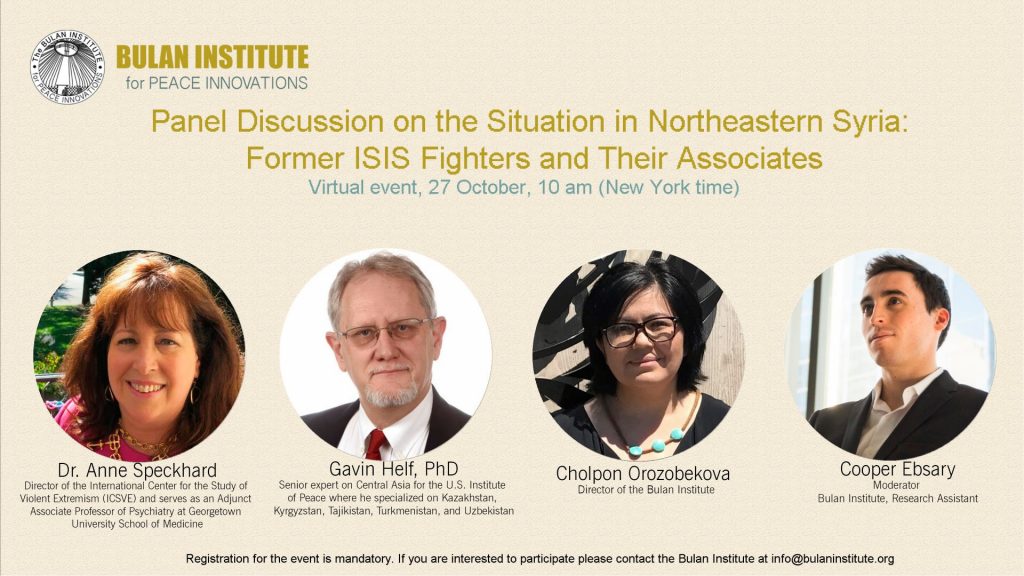 On October 27, 2020, the Bulan Institute for Peace Innovations hosted the panel discussion on the situation in Northeast Syria. The discussion focused on state policies toward ISIS affiliates being held in camps in Northeast Syria. The two experts that took part in the discussion were Dr Anne Speckhard of the International Center for the Study of Violent Extremism and Dr Gavin Helf of the U.S. Institute of Peace. The experts brought in their insights and perspectives on the issue of ISIS affiliates by examining the policies taken by countries in Europe and Central Asia.

The panel discussion began with a presentation from the Director of the Bulan Institute, Cholpon Orozobekova, who provided the findings from the research and publications from the Bulan Institute. She reiterated once again that repatriation appeared to be the best policy to address the situation in Northeast Syria.

In her presentation, Dr Anne Speckhard discussed her personal experience travelling to the camps and her findings from discussions with 253 foreign ISIS fighters and their families. The health conditions in the camp were found to be appalling, with many mothers claiming that their children are sick and dying. This situation is particularly acute now that the world is confronting a global pandemic. “The US [is] leading the way in repatriation” she said, “but we also don’t face such a terrible problem”. The US only had 300 travellers and only need to take back around 20 people. The European resistance to repatriation could be linked not only to the higher number of foreign fighters and their families they would be expected to repatriate but also the repeated terrorist attacks on the continent which soured public opinion towards the issue. Politicians therefore were afraid of enabling repatriation and it resulted in the drafting of inadequate laws and policies towards the issue. Currently, European countries are only bringing back orphans, children and mothers on a case by case basis. She reiterated that most of the children in the camps were under seven years old, but there was a reluctance to bring them back due to EU family reunification laws. “Are you responsible for your countries’ citizens, are you responsible for your innocent children?” she asked, as the consequences of inaction were laid bare.

Dr Gavine Helf discussed how Central Asia has taken the lead in repatriation, with the notable successes of Operation Mehr in Uzbekistan and Operation Zhusan in Kazakhstan. However, he warned that “repatriation is the easy part”, reintegration being the difficult follow through to the policy. Dr Helf went on to outline the different models of reintegration that Central Asian countries had taken. Kazakhstan has taken “a state-led, institutional de-radicalisation approach”, the theory of the case being that radicalised citizens had been exposed to bad versions of Islam, and that their de-radicalisation should stem from their reintroduction to more peaceful, local versions of Islam, working with theologians and psychologists. Tajikistan however has adopted an approach that rejects the idea that there is an ideological problem: “It’s not about changing what’s in people’s hearts, it’s about changing people’s behaviour”. Measures of success therefore are defined by the ability of returnees to start working and engaging in normal life again. Uzbekistan has a model of “organic re-integration”, using the Mahala, the principal communal organisation that is locally present throughout the country. The Mahala is capable of providing “preventative oversight and intervention”, that would be capable of bringing people back. It is a model of communal intervention, rather than individual behaviour change.

Despite their success in repatriating their citizens, Central Asian states still have gaps in their capabilities to address the problem of trauma issues and PTSD, child education and developmental issues, the lack of a long-term capacity for providing social work and the stigmatisation of returnees. There is a fundamental question of the capability and desire of societies to take back their former compatriots. The Question and Answer session which followed the presentation centred on both the lack of these capabilities and the European aversion to addressing this issue. ISIS fighters who were sent to Iraq and Syria to be tried, leading to questions of the morality of such an approach due to the problems facing those judicial systems. The discussion also focused on the issue of the underestimated agency of women in engaging and travelling to the Islamic State. Dr Anne Speckhard concluded by pointing out that the demonisation of Islamic people really set Europe apart from the Central Asian states. Dr Gavin Helf reminded the audience finally that the world had to find a way to end the global war on terror in a manner that is humane and reconciliatory.

It is important to note that all these policy positions and developments have recently been undercut with the repeated disruptions and lockdowns from COVID-19, adding a considerable obstacle to addressing the issue of returning ISIS fighters and their families to their countries. 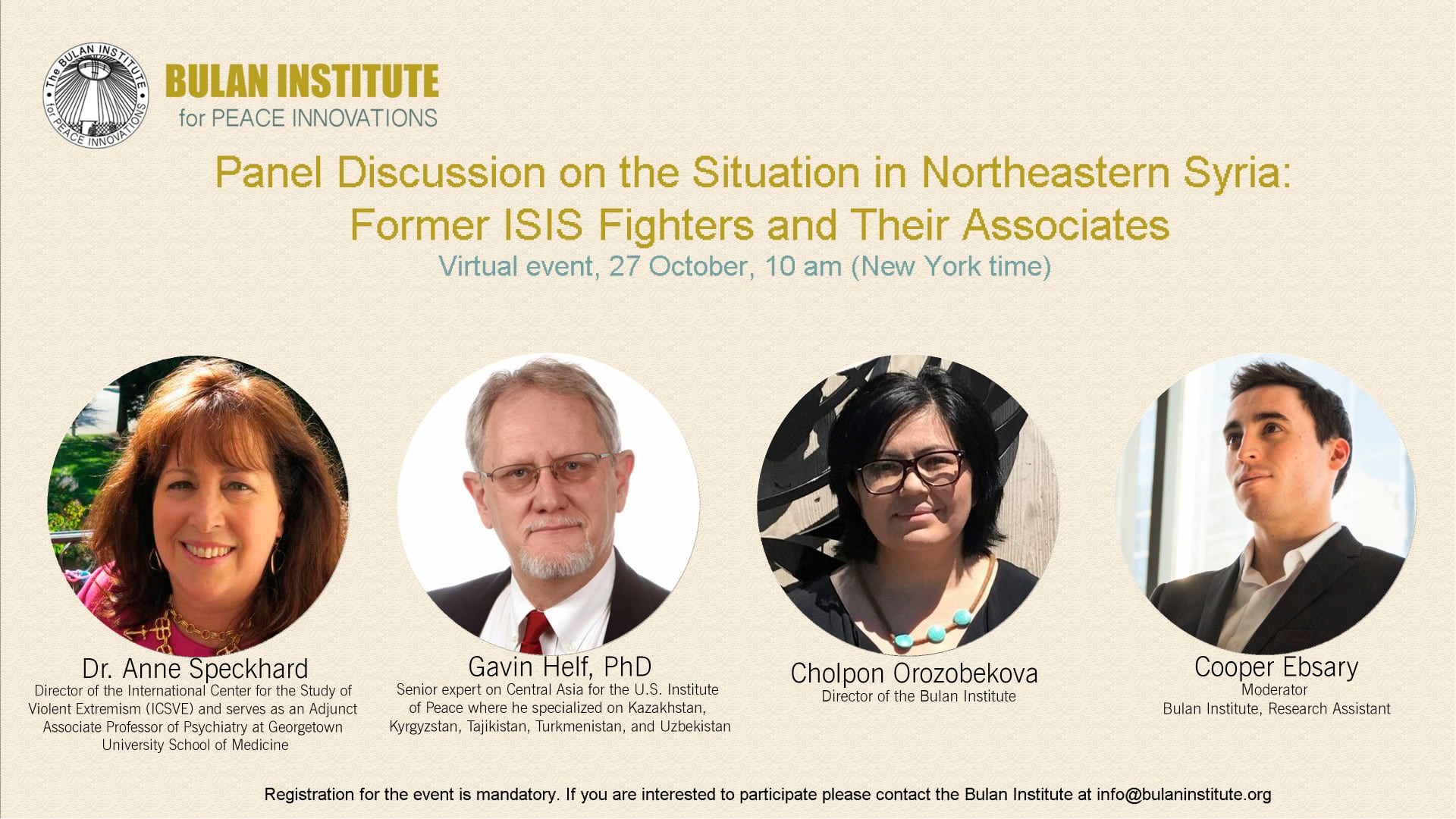