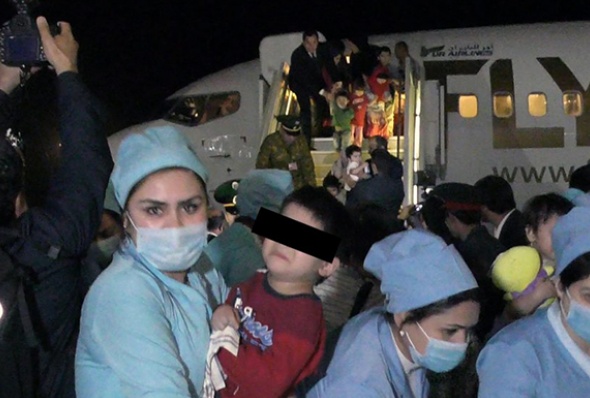 On December 3, 2020, the Bulan Institute for Peace Innovations hosted the panel discussion to discuss the repatriation of women and children in Central Asia, notably in Kazakhstan and Tajikistan. Four local experts took part in the discussion including Mr. Keneshbek Sainazarov from the NGO Search for Common Ground, Ms. Yulia Denisenko and Mr. Nurlan Abdyldaev from the Asia Group Foundation and Mr. Rustam Azizi who joined from Tajikistan. The experts brought fascinating and unique insights into the mentality which shaped the repatriation policy in Central Asia, while detailing the specific processes and negotiations involved in repatriation and rehabilitation.

The panel discussion began with opening remarks from the Director of the Bulan Institute, Cholpon Orozobekova, who outlined recent research conducted by the Bulan Institute into the conditions former ISIS family members are experiencing in Northeast Syria. She reiterated once again that repatriation appeared to be the best policy to address the situation, and that Central Asia’s model could serve as an example to other countries.

Mr. Keneshbek Sainazarov provided an important overview of the drivers of support and success of the repatriation policies in Central Asia. Repatriation in Central Asia had the full support of, and indeed in some cases was driven by, the presidents and leaders of Central Asian countries. The government institutions provided a leading role in ensuring that the issue was addressed from a whole-of-government and whole-of-society approach, making the policy response far more comprehensive than in other countries and regions. On a more granular level, Mr. Sainazarov highlighted the important role of civil society in addressing issues with returnees at the community and even the family level. These issues can range from the fears of the community and the stigma experienced by returnees to the linguistic and psychological barriers children returning from Northeast Syria may experience. There is also a major role for academia and research institutions, as Mr. Sainazarov specifically saluted the work of the Bulan Institute as important in raising awareness and sharing experiences of repatriation. Finally, Mr. Sainazarov mentioned the change in tone in local media, which had gone from demonising those that left to taking a “do no harm” perspective on the repatriation issue. Overall, Central Asian civil society and institutions have been mobilised to effectively enact the repatriation and rehabilitation policies in the region.

The conversation was followed by a presentation from the two members of the Asia Group Foundation, Ms. Denisenko and Mr. Abdyldaev. In their presentation, they nodded to the importance of noting that there is a considerable difference in the Western and Muslim perspective of the issue. Mr. Abdyldaev made sure to mention the scope of the traumas experienced by those in Northeast Syria, which confirmed how complex and difficult it is to truly effective rehabilitate returnees into society. To do this however, Mr. Abdyldaev highlighted a three-pronged approach: systemic, organisational, personal. The systemic level is about reintegrating people into society. It involves developing a legal status for returnees, a need to give them new documents and develop local institutions which can shield them from social rejection. However, Mr. Abdyldaev said, “there is a lack of subject matter experts” to help enact these necessary reforms. The organisational level is about the rehabilitation process. The rehabilitation process requires a good location for the rehabilitation and quarantine centres, as well as adequate security and healthcare. Such infrastructure needs to be well funded and monitored to offer the best opportunity to success. The final section Mr. Abdyldaev mentioned were the personal risks and challenges, of which they are many and which vary largely from person to person. There is an important need for tailored psychological assistance for these individuals, a gap that needs to be filled as soon as possible.

Mr. Azizi gave the final presentation which was highly informative, delving into specific negotiations and processes that took place to ensure the return of 84 Tajik children from Iraq and Syria. He bemoaned the fact that 575 women and children were still present in Northeast Syria, but demonstrated the Tajik government was making a considerable effort to repatriate these individuals through negotiations with the Iraqi and Syrian governments. These efforts however have been delayed due to the COVID-19 pandemic. Mr. Azizi also stressed the importance of understanding Tajikistan’s recent history when assessing its current policies. Indeed, he noted, Tajikistan repatriated and reintegrated far more people in the early 2000s than they need to today. “Extremism has been a challenge since independence”, he said, reminding the audience of the unique position in which Tajikistan sits when addressing the issue of returning foreign terrorist fighters and their families. Despite this experience, Tajikistan has shown a compassionate approach to the issue offering amnesties to over 200 people by December 2019 and by considering the welfare of children first and foremost when repatriating them. A policy that forbids the division of families safeguards the fact that children of ISIS fighters will not have to leave their siblings and the children have access to accommodation and education. He also brought to the fore the debate of which approach should be taken towards reintegration, with Tajikistan taking a less formalised, more systematic approach.

The presentations were followed by an engaging Question and Answer session involving many questions from participants. The experts discussed the support Central Asian states have received from the international community, the difficulties of transitioning personalised support online during the pandemic and the ability of political will to be generated more effectively in Central Asia than in the rest of the world. Mr. Azizi specified that the generation of political will and the processes that are most effective are different in Central Asia and the West and this fact must be considered when going forward. He also repeated how important it is not to focus solely to deradicalization, but to assure the social reintegration of returnees. Mr. Sainazarov reminded the audience as well that the debate around rehabilitation and reintegration is ultimately about human nature and that it is essential to recognise the fact that deradicalization will not work for everyone, requiring societies and states to prepare contingency plans for such an eventuality. Overall, the experts reemphasized the fact that repatriation, rehabilitation and reintegration are long-term processes and there is always a need for sharing experiences and for further financial support to make sure the policies are fruitful.

The discussion was however best summarised through the parting words of Mr. Sainazarov: “Central Asia has always been at the centre of world history and we will get through this again with close collaboration and a Central Asian spirit”.