On 29 April, to promote discussion on the human rights violations against ethnic minorities in China, the Bulan Institute and the International Service for Human Rights [ISHR] organized the “Arbitrary Detention and Re-Education of Ethnic Minorities in Western China” event in Geneva. Members of the ISHR, CIVICUS, UN Special Procedures, the Graduate Institute, IRSF and the UNHCR were present.

Although ethnic repression of minorities has existed in China since the dawn of the creation of the People’s Republic of China in the 1940s, the situation has drastically worsened since 2017. An estimated 3 million ethnic minorities, including

Central to the event were the discussions with victims and witnesses whom have experienced repression in China. Victims discussed their personal experiences in Chinese re-education camps, which they detailed as having severe prison conditions. One victim emphasized her time at the camp, in which she was subjected to various medical tests, blood sampling and torture. The victims emphasized that the re-education camps are attempts of the Chinese Communist Party to suppress and ultimately annihilate ethnic minorities and their culture.

Various speakers who joined from Bishkek, Almaty and Brussels, including Tynchtykbek Chorotegin and Gene Bunin, discussed the current situation in Xinjiang and joint actions should be taken by NGOs and international actors to address human rights abuses against ethnic minorities by the Chinese government.

In photo: Gulnur Kosgeulet shows a photo of her husband, Ekpor Sorsenbek, who she believes is in a re-education camp in Xinjiang, in Almaty, Kazakhstan, on Jan. 21, 2019. (Reid Standish, Foreign Policy) 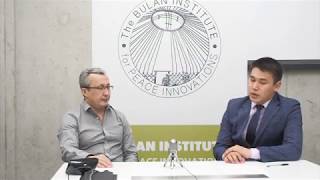